- A study based on ancient Hindu scriptures and modern Science.

A Hindu temple is a structure designed to bring human beings and gods together, using symbolism to express the ideas and beliefs of Hinduism. A Hindu temple is a symbolic reconstruction of the universe and universal principles that make everything in it function. The temples reflect Hindu philosophy and its diverse views on cosmos and Truths.

The spiritual principles symbolically represented in Hindu temples are given in the ancient Sanskrit texts of India (agamas, Vedas and Upanishads), while their structural rules are described in various ancient Sanskrit treatises on architecture (Brhat Samhita, Vastu Sastras). The Hindu temple is often referred to in ancient Hindu texts on architecture (the Vastu Shastras) as the sacred mountain Meru or Kailasa, the dwelling of lord Shiva in the Himalayas.To represent such spiritual structure in other places granite a part of the mountain was used to build temple in the ancient period. Chola dynasty was on top of the history to build such great Hindu temples where they exist thousands of years.

What ancient scriptures such as agama and epics of Hinduism say 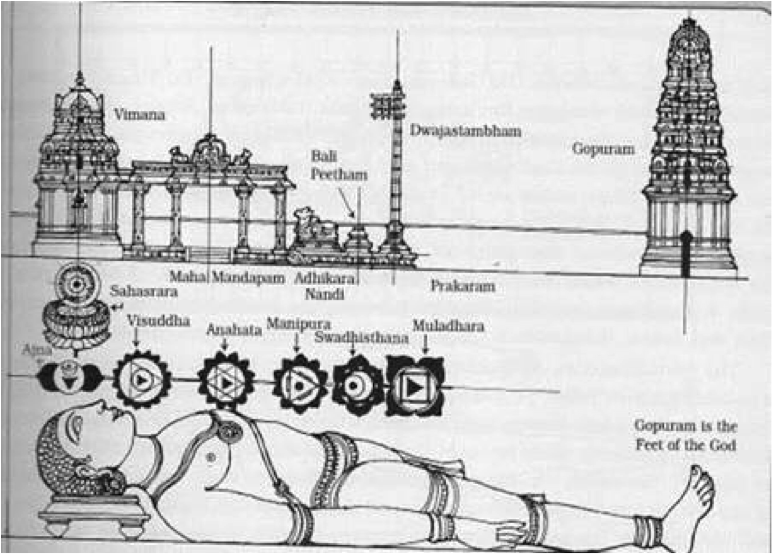 Five of earth, four of Water, three of fire, two of air, and one of space.

The Granite stone is the place where all these elements are found and hence is used to create deities throughout the Hindu culture.

In addition to the above spiritual explanation, ual can be explained scientifically by using Blackbody Radiation law which refers to an object or system (Idol or shrine) which absorbs all radiation incident upon it and re-radiates energy which is characteristic of this radiating system only, not dependent upon the type of radiation which is incident upon it. You can simply experience it while having panchamrutham given in the temple. You do the same mixing at home , nothing specially you feel in terms of smell and taste (gantham and rasa) .

Further we look at the scientific features of granite

Granite stones has more sharpness on edges than others where it easily collects more electrons (the form of cosmic energy in Hinduism). Since the sanctum(garphagraham) is made of granite stone it happens automatically where devotees get more praise from lord Ganesha.